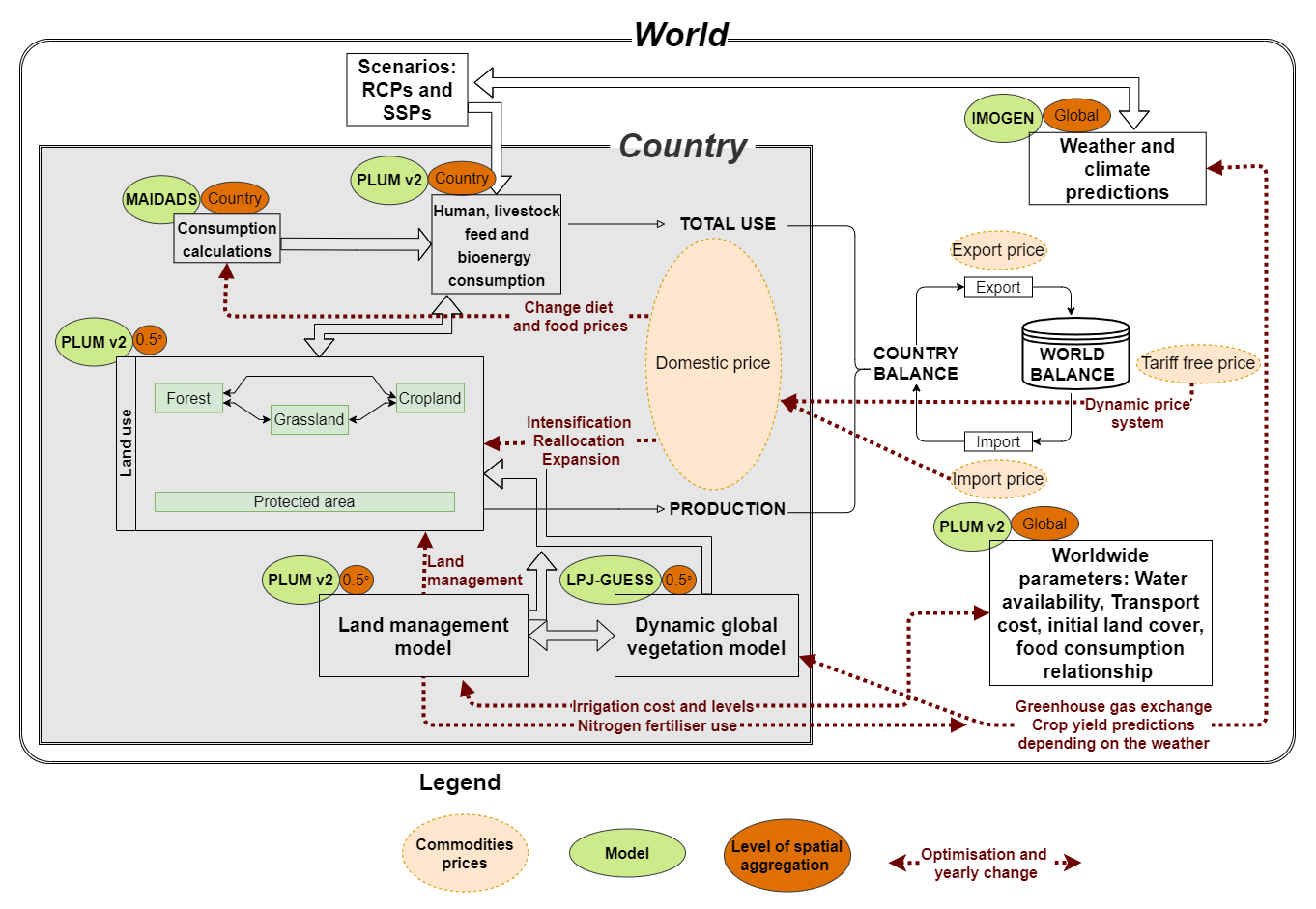 LPJ-GUESS (Smith et al., 2014) is a process-based, dynamic global vegetation model (DGVM) that simulates global and regional dynamics and composition of vegetation in response to changes in climate, land-use change, atmospheric CO2, and nitrogen. The model distinguishes between natural, pasture and cropland, and managed forest land-cover types, all of which include C–N dynamics (Olin et al., 2015a; Smith et al., 2014). Vegetation dynamics in natural land cover are characterized by the establishment, competition, and mortality of 12 plant functional types (PFTs) in a number of replicate patches. Physiological processes like photosynthesis, autotrophic, and soil heterotrophic respiration are calculated in natural and managed ecosystems; a set of carbon allocation rules determines plant growth. Plant establishment, growth, mortality, and decomposition, as well as their response to resource availability (light, nutrients, water), modulate seasonal and successional population dynamics arising from a carbon allocation trade-off. Vertical forest structure is accounted for by the use of different age classes for woody PFTs.

In managed ecosystems, pastures are populated by C3 or C4 grasses which are annually harvested (Lindeskog et al., 2013). Croplands are represented by prescribed fractions of five crop functional types (CFTs), which are moderately tilled, fertilized, and harvested (Olin et al., 2015a), and are prescribed to be either irrigated or rain-fed. The CFT yields are used as input to PLUMv2. Managed forests can be thinned, clear-felled or selectively harvested. 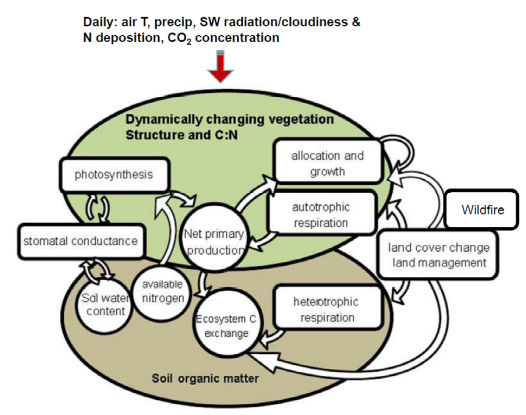 Madingley (Harfoot et al., 2014) is a process- and individual-based model of ecosystems. It aims to simulate the dynamics of all heterotrophic organisms in ecosystems. Madingley is different from existing ecological or biodiversity models as it includes both marine and terrestrial ecosystems, and marine and terrestrial human pressures – fisheries, agriculture, and climate change, for example. It is global in scope but can be applied regionally or nationally, and allows for unpredictable behaviour to emerge – meaning that food webs can shift and ecosystems can radically alter. The model is defined at the level of individual organisms, which are defined according to functional traits. All organisms undergo a set of fundamental ecological processes. Each organism undergoes metabolism to meet life costs, is predated upon by other organisms, eats itself from either plant or animal resources and if it can meet its metabolic costs, it will grow. When mature, organisms can reproduce offspring individuals into the model. Organisms are also subject to non-predation mortality in the form of starvation, senescence and background causes, such as disease. Lastly, organisms can move from their current location (a grid-cell) to another cell. As a result of these individual-level processes, higher-level properties of the ecosystem emerge from the model.

IMOGEN (Huntingford et al., 2010) is an intermediate complexity climate system emulator to evaluate the impacts of climate change on the terrestrial surface. IMOGEN uses a pattern-scaling approach to climate change, which drives a gridded land surface and vegetation model MOSES/TRIFFID. The structure allows extrapolation of General Circulation Model (GCM) simulations to different future pathways of greenhouse gases, including rapid first-order assessments of how the land surface and associated biogeochemical cycles might change. Evaluation of how new terrestrial process understanding influences such predictions can also be made with relative ease.

CRAFTY (Brown et al., 2019) is a large-scale, agent-based modelling (ABM) framework for the simulation of land use change (CRAFTY: Competition for Resources between Agent Functional Types). It is designed to allow efficient but powerful simulation of a wide range of land uses across large geographical extents, based on the decision-making of simulated land managers who generate a variety of ecosystem services. It is fully open-source and can be used without the need for any programming. The basic framework is described in Murray-Rust et al. 2014.